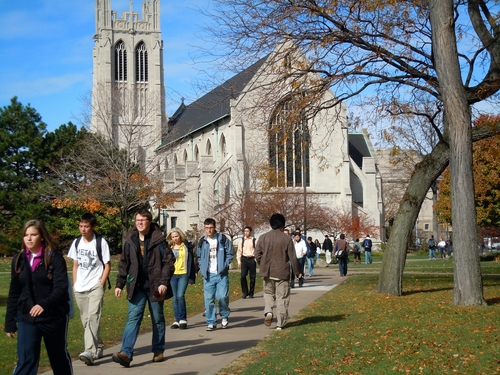 Case Western is a private research university of approximately 10,000 undergraduate and graduate students located in urban Cleveland, Ohio. The school is one of our favorites here at College Right. It was founded in 1967 when Western Reserve University, known for its strong liberal arts and professional programs, and Case Institute of Technology, a school of science and engineering, were formally merged to create one university. While the two universities had been friendly neighbors for over eighty years, often sharing buildings and professors, it wasn’t until the late 1960’s that the two schools decided to merge to create the strong science and arts college it is today.

Case Western is known for its rigorous academics and expects a great deal from its students. Research is central to a student’s education at Case, and the school consistently ranks in the top twenty research institutions. In 2014, the school received over $300 million to fund an upwards of 1,600 research projects. One of the main reasons we love this university is that its students have the opportunity to create and implement research projects as early as their freshman year-not something you see at a lot of large universities. While CWRU’s undergraduates are well known for having a strong focus in the fields of medicine and engineering, there is far more to the this university than just science and research. With almost 60 undergraduate programs offered through The College of Arts and Sciences and the opportunity to design personalized major, students who are interested in the liberal arts will also find a home at Case Western.

While Case expects a great deal from its students academically, there are also plenty of opportunities to get involved socially on campus. Greek life is a prominent part of Case, and fraternities and sororities are considered some of the most popular campus groups.  Over 30% of students take part in Greek life, and these organizations place a high emphasis on social and community service events as opposed the traditional parties often associated with fraternities and sororities. For those interested in participating in athletics, the university offers ten men’s sports and nine women’s sports, as well as a fair amount of intramural sports. In addition, the school has over 500 organizations and clubs to choose from, guaranteeing every student a chance to connect with other like-minded people on campus.

Case has a diverse student body, with a fairly even male to female ratio and students from over 90 countries. One very notable aspect of the campus is its ranking as one of the top 25 LBGTQ friendly schools according to Campus Pride, a national organization that aims to make universities more inclusive for gay, lesbian, bi and transgender individuals. Whatever walk of life or background students come from, those who attend Case can take pride in knowing they are a part of a campus that promotes diversity and strives to make all its student feel welcome, safe, and included. For more information, visit www.admission.case.edu.