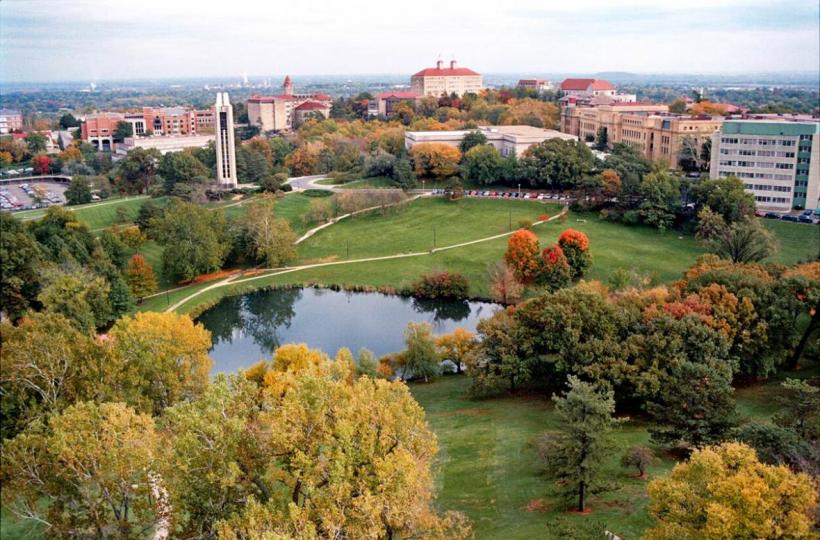 More than 150 years ago, anti-slavery settlers in Kansas Territory intent on ensuring that Kansas would enter the union as a free state were described as “jayhawkers.” At the end of the Civil War, that region’s same spirit of freedom led to the establishment of the largest public higher education institution in the region, the University of Kansas. Now, the Jayhawk, a sparrow hawk and blue jay hybrid, is the university’s mascot and is emblazoned on athletic uniforms and hoodies worn with pride.

Known for the scope and quality of its academic programs, KU offers more than 190 undergraduate majors in the sciences, arts, and humanities. Many of its programs are highly ranked and well renowned. For example, its School of Architecture and Urban Design has one of the best undergrad architecture programs in the nation. The university is also repeatedly listed as one of the best values in higher education – tuition is 13% below the national average and a whopping 50% of students graduate from bachelor’s degree programs debt-free.

The University of Kansas is also a leader in research and has 12 major internationally recognized research centers and laboratories that oversee studies in cancer treatment, life span issues, and biodiversity, just to name a few. Its Cancer Center is Kansas’ only designated National Cancer Institute. The Biodiversity Institute holds more than 10 million specimens of plants, animals, fossils, and archaeological artifacts, and is a world leader in collection-based studies such as evolution, paleobiology, and past cultures.

Considered one of the most beautiful campuses in the nation, University of Kansas’ central campus is situated in the tree filled hills of Lawrence, a small city with a population of 90,000. The campus is the hub of the city and the nearby downtown area offers students an array of music venues, art galleries and hip eateries. For those who crave a big city every so often, Kansas City is only 40 minutes away and is great for weekend day trips.

Sports, especially men’s basketball, are a big deal for KU students. The Kansas Jayhawks participate in the NCAA’s Division I and in the Big 12 Conference, and have won thirteen National Championships, five of which are in men’s basketball.

But this isn’t to say that you have to be into sports to fit in at this school. There are over 600 organizations that include a varied collection of clubs, student government, as well as social, political, religious, and service groups. The university’s debate team has had more teams compete in the National Debate Tournament than any other university and has won the tournament a total of five times. In 2007, the University Daily Kansan, the school’s newspaper, placed first in the Intercollegiate Writing Competition of the William Randolph Hearst Writing Foundation competition.

So if you want a great education at an amazing value, coupled with a campus teeming with activities and school pride, joining the Jayhawks family might be perfect for you.